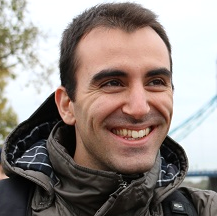 NEWS: I am very happy to start a position at the University of Amsterdam. If you are thinking of starting graduate studies and are interested in learning and applying mathematical and computational tools to solving society’s pressing problems, send me an email with your story and CV!

I am an Assistant Professor at the University of Amsterdam, working at the Informatics Institute and the Institute of Advanced Studies, and a Visiting Research Scholar at the Andlinger Center for Energy and the Environment and the Princeton Institute for International and Regional Studies, at Princeton University. I finished my Ph.D. in Sciences at the University of Minho, in Portugal, in 2017. My research agenda is on solving the challenges of the provision of public goods: can we leverage our knowledge of systems involving humans, resources, and the institutions that govern them to overcome the dilemmas that oppose self- and collective-interest? How can we design institutions and interventions such that by pursuing our individual interests we contribute to society? My research covers the topics of the management of public goods, the resilience of ecological systems, and evolutionary biology by using and developing tools and resources in the areas of complex systems, mathematical ecology, stochastic processes, game theory, scientific computing, network science, and numerical methods.

I work on a set of diverse problems with a set of amazing people.

One of the most prominent examples revolving around opposing self- and collective-interest of individuals concerns climate change governance. It requires the study of mechanisms that promote cooperative behavior among the agents involved – whether they are countries, states, or local communities – when they can benefit from the actions of other players without making any effort themselves. To this purpose, I have developed evolutionary game theoretical models, a tool that stems from evolutionary biology and has proven powerful to describe frequency dependent dynamics both in biological and social problems. This feature is essential in this class of problems as it allows us to frame interactions following the strategic principles of traditional game theory while keeping, first, time dependency and, second, tractability with sequential changes of behaviors and changes of outside context. The work my coauthors and I develop derives from and runs in parallel with experimental data collected in behavioral studies in which contributions to public goods heavily depend on the uncertainty of future losses, which plays a key role in decision-making. We analyze these dynamical systems to show how decisions within small groups significantly raise the chances of coordinating to save the planet’s climate, supporting the calls for a decentralized or polycentric way of management. This is the case when dealing with the goods themselves or with the sanctioning mechanisms to impose contributions.[1] I then pursued the comprehension of the dynamics with heterogeneous players with respect to wealth inequality issues and their impact in the adaptive decision-making process of developed and developing countries.[2] I have also focused on empirical and theoretical analysis of the effect of co-benefits and overlapping institutions on deepening cooperation,[3,4] where we show how information collected by players about the game converges to the game itself when groups are smaller. Importantly, the success of any institution is a second-order public good and its support a social dilemma. In an ongoing work based on a large body of experimental literature, we have shown that there is a strong interplay between the scale of the public good and the scale at which decisions for supporting institutions are made. In that interplay, providing information can hinder the sustainability self-govening cooperative groups or, through long term learning, it can promote and stabilize them.[5]
These studies contribute strong base models and tools to tackle the complexity of the management of public goods. With their construction, I have employed not only analytical and numerical tools but I have also used large-scale simulations to validate and expand those models. Notwithstanding, novel questions emerge from the work developed so far, which require interplay between the decision-making dynamics and the dynamics of goods and resources, a key feature in any social-ecological system.

[5] Vítor V. Vasconcelos, Astrid Dannenberg, and Simon A. Levin. The endogenous origin of institutions to promote cooperation: the effects of scale, information, and remembering the past. (2020) In preparation

Many social-ecological systems are comprised of ecological resources that are extracted by humans. In those settings, strategies employed by individuals influence the environment over timescales that do not necessarily align with the outcome of the strategic interaction. Feedback between the environment and individual behavior is common – where the state of the environment alters the dynamics of competing strategies or types, and vice versa. When feedbacks are present, the dynamics of strategies and resources must be considered jointly: neither alone can describe the dynamics of the system. In a collaboration with Dr. Andrew Tilman, we model a broad range of ecosystem resources and consider the effect of different levels of information on those resources as well as different forecasting abilities of its dynamics, for understanding their impact in resource sustainable management. We show that, when individuals consider the future state of the resource in their (selfish) decision-making process, the resource tends to be stabilized only in certain cases. When, additionally, individuals try to forecast others’ behaviors, they give rise to a large number of instabilities. Our results are based on a general analysis, of which a number of prior studies on joint strategic-environmental dynamics, across a range of disciplines, can be understood as special cases. We discuss the implication of our results for fields ranging from ecology to economics.

Modern day human civilizations are confronting rapid and extreme environmental, social and economic changes. As droughts, floods and other extreme weather events increase, food production in rural areas, and the food security of large urban populations are becoming increasingly threatened. Prediction suggests that global food access must double to satisfy the increasing demand of world population by the year 2050. Yield enhancement relies heavily on the use of nitrogen fertilizer. However, excess nitrogen fertilizer results in high loss into the atmosphere and/or waterbodies, causing pollution, public-health issues, and long-term greenhouse effect. Climatic disasters such as drought are predicted to pose further threat to agricultural production. Countries will likely further increase nitrogen fertilizer use in the face of climatic risks to ensure crop yield. Many questions arise from this rapid changing food system, envolved in a nexus with energy and water.

Working with graduate student Wenying Liao, we look for designing a global food system where food security is ensured andnitrogen loss is minimized (or kept at a reasonably low level). In that context, we explore the utility of a central, voluntary food bank with a price on nitrogen polution. We show how such institution could provide shelter for climate risk and then use it to decrease total global nitrogen input. We discuss the political implications and feasibility of its creation. Check our talk at the ESA Annual Meeting.

Complementarily, with Prof. of agroecology Theresa Ong, we are addressing this issue from a bottom-up perspective. In recent history, urban and peri-urban agriculture (UPA) has emerged as a crisis response to food insecurity. Archaeological and historical research suggest that UPA was a major component of past urban food systems and a key factor for the resilience of cities against social and environmental perturbations. We propose to synthesize archaeological, historic, and current data on UPA characteristics and major environmental, economic, and social changes to understand what features of UPA may contribute to the resilience or vulnerability of cities to social, economic, and environmental threats. Stay on the lookout for our new project.

The Coral Triangle reef system (CT) is the epicenter of marine biodiversity and one of the most threatened ecosystems in the world. To assess the reef- and network-scale response of corals to thermal perturbation in this region, in a work lead by theoretical ecologist Prof. Lisa C. McManus, we have developed a metacommunity model based on coral-algal competition coupled with seasonal larval dispersal. [1] With this model, we have explored the sensitivity of the CT system to a range of future temperature regimes, from 0.5 to 2.0 degree C increase in the system by 2054. Time to reef collapse and total change in percent coral cover varied widely across the region, in response to this warming, with some reefs experiencing local extinction while others remaining virtually unchanged. The magnitude of thermal stress as well as recruitment-based metrics are significant drivers of these patterns, signifying the importance of linking ecological processes across multiple spatial scales to fully characterize the resilience of a reef network perturbed by climate change. Additionally, we have explored heat tolerance as a heritable trait throughout the CT to facilitate coral adaptation. We have found that warm-adapted reefs can provide a regional protective effect against bleaching-related mortality through larval connectivity. Last, the interaction between intra- and inter-patch processes under different magnitudes of thermal stress can be complex and nuanced, resulting in counterintuitive coral cover trajectories.[2] This framework can be extended to accommodate a wide array of life history characteristics that can further elucidate the adaptive capacity of corals.[3]

Decarbonization of the world’s energy systems is arguably the most critical global technological infrastructure transformation anticipated during the next few decades with tremendous implications for human and natural systems. Crucially, the energy sector is tightly connected to the food and water sectors through what has been coin as the Water-Energy-Food (WEF) nexus. In consequence, the technological innovation entailed in decarbonization would not only be massively disruptive of existing infrastructure and the economic and political interests linked the energy sector but also to water and food. We can therefore expect political resistance, which, in democracies, will generate electoral and legislative struggles. The outcomes of these struggles depend in substantial part on the preferences of citizens with respect to different policy alternatives involving different degrees of reliance on renewable energy (RE) as opposed to fossil fuels (FF). To different degrees, RE and FF energy industries deeply influence natural systems and impact biodiversity and ecosystem services, the most direct being water reserves, which also create distinct preferences in direct and indirect users of those services. A physical coupling between human and ecological systems does not imply necessarily a coupling in human preferences. This coupling between human and natural systems, regarding human preferences, has been caricaturized many times but not directly measured in the context of such a prevalent nexus.

In response to these challenges, we propose to integrate a cross-disciplinary exploration involving political science, other applied social and behavioral science, and environmental science. Our purpose is to expand and deepen our understanding of pathways to decarbonization supported by users, while understanding the impact in human populations and in their use of natural resources.

This work is just happening, and I count with the collaboration of an increadibly diverse team. But see my class on this topic, “Rapid Switch: The Energy Transition Challenge to a Low-carbon Future”, which I developed with an interdisciplinary team of scientists.